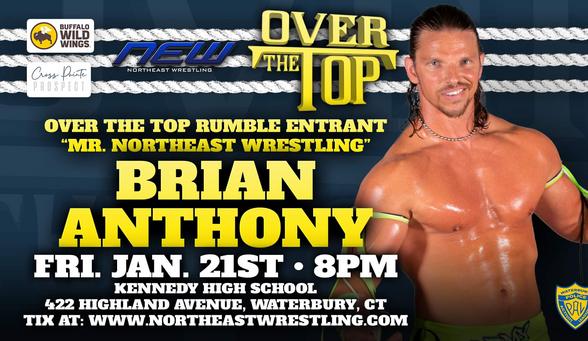 In 2004 Brian began his professional wrestling training under Jason Knight of the original ECW brand.  After spending 6 months training under Jason, and competing in his first two matches, he suffered a devastating set back when his jaw was broken in three places.   After recovering, Brian continued his training, this time under former WWE tag team specialist and member of the elite Four Horsemen, "Pretty" Paul Roma.   Brian would train under Roma in Bridgeport, CT and go on to compete in various promotions throughout the East Coast, including most notably "Power and Glory Wrestling" before landing himself in Northeast Wrestling.

Brian Anthony is now a Northeast Wrestling main stay who is approaching a decade with the company and is a two time champion.   Brian has been an active member of the NEW roster since his debut in April of 2007, and has competed on almost every event put on by the organization within that time period.  He has had the opportunity to share a locker room with some of the biggest stars to ever compete in a pro wrestling ring, including "The immortal" Hulk Hogan!   Since first appearing at Northeast Wrestling in 2007, Brian has taken on, or confronted some of the biggest names in history including "The Nature Boy" Ric Flair, "Rowdy" Roddy Piper, Jerry "The King" Lawler, "Hacksaw" Jim Duggan, Matt Hardy, Jeff Hardy, "Hurricane" Shane Helms, "The Innovator of Violence" Tommy Dreamer, and Mick Foley, amongst other past and present WWE , TNA and ROH superstars.  Despite the laundry list of Hall of Fame talent that he has faced in Northeast Wrestling, he is quite possibly most notably known for his historic record setting NEW title reign of 1,052 days that came to an end in August of 2015.

Aside from his record length title reign, Brian's Northeast Wrestling feud with rival Matt Taven is cemented in company history as being one of the most intense rivalries on record.  The two men traded victories (and injuries) back and forth for years in grueling ladder matches, TLC matches, Falls Count Anywhere stadium matches, and steel cage matches amongst others.  Brian's first NEW title reign came from a victory over Matt Taven in Waterbury, CT, while Matt's second reign as champion came with a victory over Brian in Bethany, CT.  In November of 2015 Brian competed in Northeast Wrestling's first ever casket match, taking on long time Rival Ron Zombie.  Zombie went on to win the match, but Brian would return 3 months later as a surprise entrant in the 2016 "Over the Top" Rumble match to win his second NEW Championship before losing the title to Warbeard Hanson just minutes later.  Just Months later, in September of 2016, Brian would go on to "Destiny" and align himself with "Showtime" Stevie Stamos as his new manager culminating in a victory over Tk O'Ryan and Warbeard Hansen to become the first ever 3 time Northeast Wrestling Champion!   His first successful title defense would come just weeks later when he was victorious over TNA World Heavyweight Champion Eddie Edwards.  Just several months later, in December of 2016, Brian would lose the NEW championship to Tk O'Ryan at the NEW Arena in Bethany, CT.

After losing the NEW Championship to TK O'Ryan, Brian would take a nine month absence from Northeast Wrestling.  He returned in July of 2017 with a victory over Christopher Battle.  Just months after returning, Brian would find himself in the "King Of Bethany" Tournament.  Brian would defeat Robbie E, Vinny Marseglia, and "Big Bacon" Brad Hollister to win the tournament and become "King of Bethany."   Now donning a crown, cape and surrounded by an entourage known as "The King's Court" Brian has spent much of 2017 tangled in feuds with the likes of Jerry 'The king" Lawler, and former WCW heavyweight champion, and actor David Arquette amongst others.